The mode of action of the SEM Assessment technology is to measure localised oedema by comparing the Biocapacitance marker across different tissue locations, e.g., in multiple sites around the sacrum or heels1. Once a number of SEM readings are taken in each area, the ∆ Delta is calculated.

A patient presenting with systemic oedema may be associated with higher individual SEM values however the ∆ Delta by its definition (variance between max and min values) will not be affected1 – this is crucial as the ∆ Delta is the prompt for action by the healthcare practitioner.

As described by Gefen (2020)2 if there is a condition of systemic oedema, e.g., lymphoedema or heart or kidney dysfunction, the SEM values acquired at adjacent points will be similar and hence, the SEM delta would be < 0.6. Accordingly, using the ∆ delta measure (rather than the individual SEM values) distinguishes a localized inflammatory process most likely indicating a PU is forming from a systemic increase in interstitial fluid content.

The localised oedema referenced results from a “mechanical insult” which is “fundamentally different from systemic oedema” typically caused by “sodium retention or due to a lymphatic disorder.”2

The localised nature of plasma fluid accumulation in soft tissues due to a forming pressure ulcer/injury (PI/PU) is inherently different from a systemic oedema mechanism, in both the pathophysiology and clinical outcomes.2

We recommend scanning clean, dry and intact skin. If using barriers creams and other skin protectants, ensure these are applied evenly across all anatomical scanning locations and according to manufacturer instructions; on this basis, readings will not be affected.

Our clinical data suggests that BMI is not a confounder for Provizio SEM Scanner readings. SEM values may vary in reflecting tissue fluid in skin with a higher or lower fat density. However, because body fat is usually proportionally distributed in local scan areas around the bony prominences, the SEM delta reflects the distribution of measurements performed to assess localised tissue health consistently.

1. Scanning should be undertaken with other care procedures such as structured hygiene

2. During which time the skin under the dressing would be assessed as per care Guidelines

3. Therefore there is no additional dressing removal required to facilitate scanning

4. Advanced dressings have specialised adhesives which ensure the vulnerable skin is not damaged on removal

5. As the scanning is undertaken at the same time there is a very limited impact on nurse time and patient disturbance

The Provizio SEM Scanner, a wireless handheld device that is indicated for use as an adjunct to the standard of care when assessing patients who are at increased risk for PI/PUs. The Provizio SEM Scanner is the world’s first device to objectively alert clinicians to specific anatomical areas of a patient’s body at increased risk for developing pressure damage1. This data facilitates earlier, and anatomically specific interventions designed to reverse the damaging effects of pressure and shear and prevent PI/PU from breaking through the skin. Patient risk assessments are performed with the Provizio SEM Scanner before visible damage manifests at the skin surface. Not all incipient damage will progress to a PI/PU especially when anatomically specific interventions are applied before damage manifests at the skin’s surface.

The Provizio SEM Scanner is packaged with the Instructions For Use, a Charging Hub and different power plug adapters (reflecting the specifications needed for the countries in which the device is registered).

A Provizio SEM Scanner reading is obtained by placing the sensor against the patient’s skin. When the sensor is applied to the skin with sufficient pressure, a SEM reading is displayed on the screen. The sensor must be in complete contact with the skin to acquire a proper reading.

The Provizio SEM Scanner displays the most recent SEM Value and, after the third reading, a delta value is displayed, being the difference between the lowest and highest SEM Values from a series of readings performed for an anatomical location (e.g., heels/sacrum). The readings can be taken during routine clinical care such as when visual skin assessments are undertaken or hygiene care procedures.

• When more skin damage was observed, SEM values were higher at all anatomic locations.

Current standard of care generally includes a combination of skin and tissue assessment (STA) and one or more risk assessment tools (RATs) such as the Braden, Waterlow, or Norton. Both STAs and RATs are reported to be subjective and dependent upon the experience of the healthcare practitioner undertaking the assessment1,2,3.
Provizio SEM Scanner is an adjunct to these standard of care assessments providing an objective alert of specific anatomical areas of a patient’s body at increased risk of PI/PU4.

No. Other than feeling the sensor press against the skin, our clinical studies and use in real world case studies have demonstrated that the device did not cause pain or discomfort to the patients.

Yes. The Provizio SEM Scanner cannot be used on patients with broken skin over the anatomy in question. The device is not cleared for use on paediatric patients.

When fully charged, the battery provides approximately three hours of Provizio SEM Scanner accumulated operation. Place the device in the charging hub for at least six hours to completely charge the battery.

No, the sensor is not recyclable and should be disposed of in normal medical waste. All packing however is 100% recyclable.

There is no specific shelf life.

The single use sensor should only be used for an episode of scanning – this is defined as each heel and sacrum for a single patient in a single session. It should then be disposed of and a new sensor used for the next episode of scanning. Additionally, the sensor is a single-use sensor – in line with other products of its type, re-use may pose a cross infection risk. Note, the sensor is checked on attachment to the handset and Bruin Biometrics cannot guarantee that re-use will offer accurate delta readings.

When a successful reading is taken, the device will flash blue and emit a short audio tone – the successful scan will also appear on the device’s screen.

The SEMΔ (Delta) is calculated after 3 scans are taken in each anatomical location, however we recommend taking 4 scans for each heel and 6 scans on the sacrum.

We recommend not scanning a heavily calloused heel pad – in this case, 3 readings will be sufficient (instead of 4).

For the heels, no, the order in which the readings are taking does not impact the SEM Delta reading. For the sacrum, it is important that the first reading is taken where shown in the image below (figure number 1 – just above the gluteal cleft, around S3 of the sacral bone) – all other readings (2 to 6) can be taken in any order. 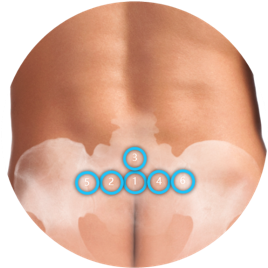 Yes, the data is secure – the patient identifier/barcode together with the patient SEM readings are sent to the Gateway in encrypted form (AES256), once uploaded to the Gateway the encrypted data is then deleted from the Provizio SEM Scanner. The system has Certificate Based Authentication which gives a high level of security.

The Gateway Dashboard allows the user to:

Yes the following data can be exported via a CSV file that can be converted to a Excel file: you can filter the data by a number of data points

Yes, the Enterprise feature that allows a single installation across multiple facilities. In the dashboard the Admin User can then filter the facilities for analysis purposes.

Firstly, simply try again – it may be that your WIFI connection did not initiate. If the error persists please contact your IT team who have the ability to access a error code to understand the issue and find a resolution.

Bruin Biometrics (and our Distribution partner Arjo) do not have access to any patient data, patient identifiers and SEM readings are securely stored on the sites server.

Yes, there is the option to either manually enter a patient ID or simply scan the patient and manually chart their SEM readings.

No, the Provizio SEM Scanner does not provide geo-location services and/or warnings about out-of-range location.

This depends on the facilities care pathway and scanning protocol. Our experience is that 1 scanner per 10 beds in Acute Care would generally fit the care pathway in this segment.

The specifications of the patient/user contacting portions of the Provizio SEM Scanner and Sensors have been verified as not showing any use of latex rubber.

Learn more about the

Are you ready to implement?